A year in the making, UCLA Anderson’s inaugural Ethics Summit exemplified the best aspects of the UCLA Anderson experience and provided the opportunity to glean ethical leadership concepts from esteemed alumni.

The central component of the half-day conference was the Ethics Summit case competition judged by Janice Chaffin (’81), board member at Synopsys and PTC; Jim Freedman (’78), chairman and managing director of Intrepid Investment Bankers; Jim Moffatt (’87), former chairman and global CEO of Deloitte Consulting; and Jay Ferguson (’94), managing partner at Vicente Partners. Two workshops held prior to the competition provided ethical frameworks for teams to shape their thinking and recommendations. Ten teams were coached by UCLA Anderson alumni, and three teams made final presentations before a standing-room-only audience of students, faculty and alumni.

“Given the pace of change and complexity of issues, it is critical to create forums likes these.”

The timing of our event suggested that, when it comes to ethically complex business situations, where better to look than Facebook? Most in the audience remembered the headlines that popped up day after day on the subject of Facebook’s responsibility (or not) to intercept “fake news.” Student participants were asked to read the recent Stanford Graduate School of Business case “Facebook: Hard Questions” in order to address the following prompt:

Imagine it is November 3, 2016, when initial accusations were made about Facebook as a source of fake political news. Mark Zuckerberg comes to you to discuss the accusations. You’re a manager on the Facebook security team and Mark wants to know what strategic recommendations you would make. 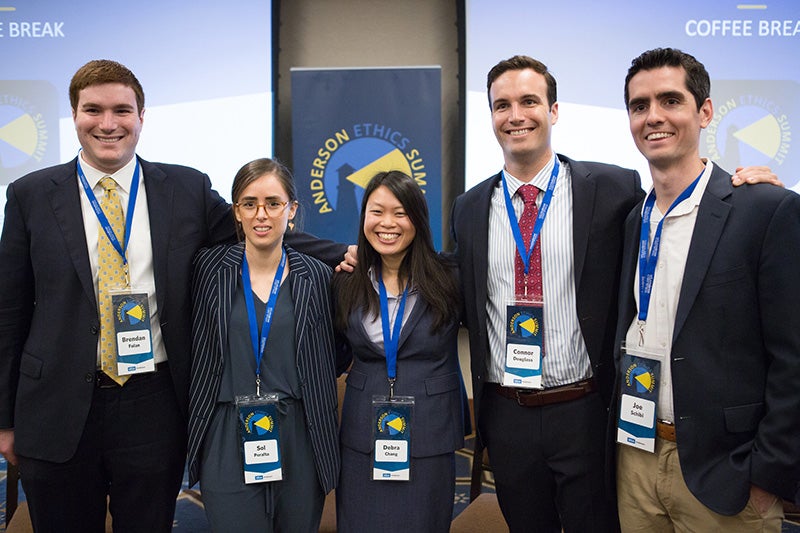 Our judges emphasized that globalization and technology have made ethical leadership a top priority for business executives. The winning team of John Olson (’19), Jason Cheung (’19), Amelia Lanfrankie (’19) and Julia Navarro (’19) presented a strong situational analysis and shared both short- and long-term recommendations in response to the spread of fake political news on the Facebook platform. They urged the company’s immediate action and investigation in the five days before the election to notify users of potential platform abuse. They recommended Facebook hire a chief ethics or compliance officer and gear employee financial incentives to mitigating risk over driving growth. They used ethical frameworks they learned in Anderson classes and in the pre-summit seminars. Their alumni coach guided them to think about Facebook culture and the underlying causes of potentially unethical behavior.

Following the competition, Professor of Marketing Hal Hershfield moderated a fireside chat with the four alumni judges, who shared pearls of wisdom from their professional experience. These are the key takeaways that emerged from the discussion:

With great innovation comes great power and responsibility. One of the unanticipated consequences of the recent wave of technology-enabled disruption (Facebook being the prime example) is that new power structures have been created. Unlike yesterday’s telecommunications companies, these new companies must be thoughtful early on about how they define their responsibilities, and how their products do or don’t overstep the boundaries.

Speak truth to power. Several judges spoke about the importance of speaking truth to power inside of organizations. Building up this muscle is important not only for our own personal growth, but also for our effectiveness as future business leaders. Junior team members should focus on building trust with senior leaders in order to create spaces for bottom-up feedback, but senior leaders should equally encourage practices that enable junior members to contribute their unbiased thoughts. That means surrounding ourselves with those who are unafraid to call us out and speak honestly, even when we may not want to hear it.

Test leadership. At the most fundamental level, Facebook may have been successful as far as traditional business metrics, but the company’s leadership was called into question by its response to fake news and user data privacy. We discussed how long-term thinking and, often, external voices are critical to providing a fresh perspective as ethically challenging situations like this one evolve.

Lead with values. As easy as it is to look back on clearly irresponsible decisions made by leaders in the public eye, it is harder to recognize the signs of things going wrong in the moment. One thing leaders must do is to continually ask themselves the question, What is the right thing to do? Simply framing business decisions in this context, and not just in terms of the bottom line, can encourage the right due diligence and structures to be put in place to avoid the worst-case scenario. 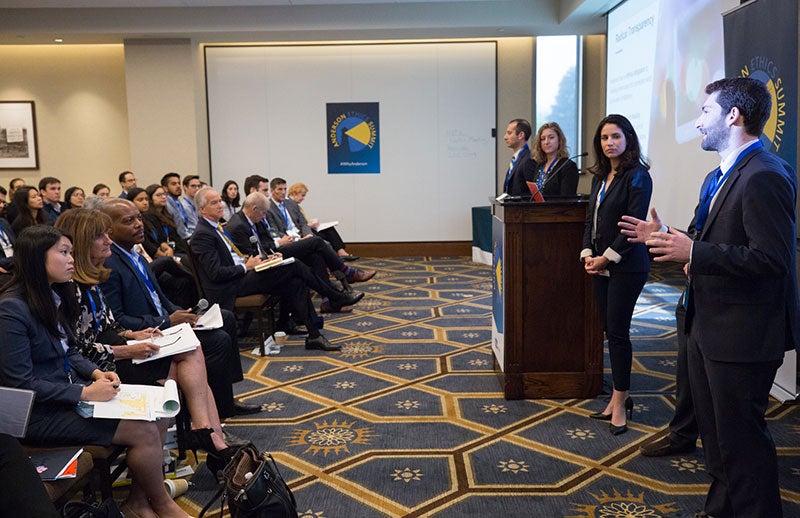 The Ethics Summit was the result of the entire Anderson community’s efforts, with participants and organizers alike agreeing on the timeliness of the event, given the rapid pace of change and increasing complexity of ethical issues in the workplace. There was a clear excitement and energy in the room as we listened to both students and alumni share their perspectives on the Facebook case. Freedman commented, “I was impressed with the teamwork I saw on the student level as well as with the judges. Each of the student teams brought a thoughtful approach, and it was eye-opening and rewarding to see their thought processes. It was also fun being with the other judges and seeing how each brought their own thoughts and views to the table.”

This experience sparked an important conversation around ethical leadership — one that is only just beginning. Moffatt observed, “Given the pace of change and complexity of issues, it is critical to create forums likes these.” The Ethics Summit formed a beautiful picture of what happens when UCLA Anderson faculty, alumni, students and staff come together to “think in the next.”