At American Girl, Katy Parker Dickson (’92) shoots for the moon

American Girl’s 2018 Girl of the Year is Luciana Vega, who aspires to be the first astronaut to go to Mars; Anderson alumna Katy Parker Dickson is president of Mattel’s American Girl subsidiary

Are We Prepared for the Workplace of the Future?

Katy Parker Dickson (’92) has been on quite a career trajectory — owing in large measure to the formative years she spent in Huntsville, Alabama, a.k.a. Rocket City, where scientists devised the rockets that sent men to the moon and developed propulsion for the space shuttle.

She has gone from managing the design and testing of a laser-based weapons system for the U.S. Air Force to marketing American Girl dolls, including a spacesuit-clad character named Luciana Vega who aspires to be the first astronaut to go to Mars. (Thanks to Dickson, Huntsville plays a starring role in Luciana’s story.)

“STEM doesn’t have to lead to any particular career,” said Dickson, 53. “Some people literally go to space. I took it to becoming president of American Girl, where we are encouraging girls not to limit themselves.”

Dickson learned to appreciate risk-taking from her multitalented father, an engineer who became a college professor and went to seminary school. His restless spirit kept the family on the move, to Michigan (her birth state), Illinois, Pennsylvania, Kentucky, Connecticut, Wisconsin and Alabama, where she graduated from Huntsville High School.

The exposure to Huntsville’s science and engineering culture encouraged Dickson to seek an appointment to the U.S. Air Force Academy in Colorado. After graduating in 1988, she was stationed at the Los Angeles Air Force Base in El Segundo for four years, working on laser-based weapons as part of the Strategic Defense Initiative, or “Star Wars,” a program begun under President Ronald Reagan in 1983. The program’s intent was to develop a sophisticated anti-ballistic missile system to defend against potential attacks from what was then the Soviet Union.

“We all try to infuse our experiences into the dolls we create. It was a thrill to infuse my hometown Space Camp into Luciana’s story.”

During her stint in El Segundo, she enrolled in the UCLA Anderson School of Management’s Fully Employed MBA program, after her Air Force supervisor agreed to a flexible work schedule so that she could attend classes on Thursday afternoons and Saturdays. Although Dickson did not have the requisite five years of civilian work experience, Anderson was impressed with her time at the academy, a “leadership laboratory” where students took on ever-increasing responsibility.

“You end up running the academy as a student,” Dickson said. “I felt I was ready to go on to the MBA stage.” The 60 or so students in her class thrived in the structured environment, getting to know one another, working on team projects and sharing the experiences they brought from many industries.

The FEMBA program launched Dickson into the corporate world.

Through UCLA connections, she secured an interview with General Mills Inc. She left the Air Force with the rank of captain, and moved to Minneapolis. During her 23 years at General Mills, she served as a marketing manager for snacks and cereals and led strategy, innovation and marketing for Pillsbury brands and for Old El Paso and Betty Crocker meals.

In 2015, Dickson left General Mills to take what she called “a career-broadening move” as the first chief marketing officer at the News America Marketing division of News Corp., the media conglomerate founded by Rupert Murdoch. 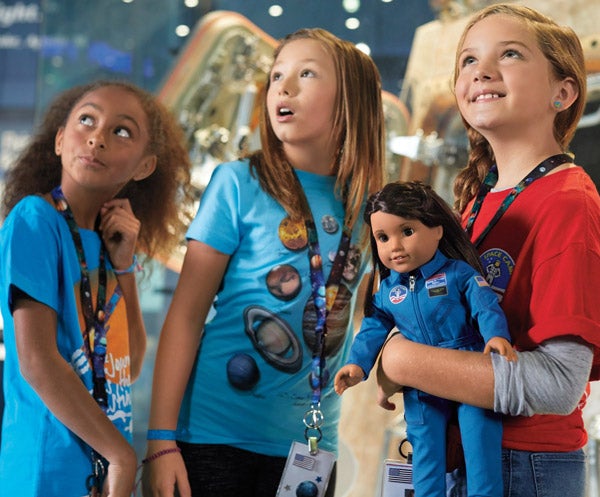 In that role, she did business with U.S. marketing giants, including Mattel Inc. During one conversation, she mentioned how much she loved Mattel brands, especially American Girl dolls and books, which her two daughters began enjoying at about age 7. (Daughter Sydney is now a high school freshman; Audrey is a high school senior; son Michael is a sophomore at the University of Wisconsin.)

In 2016, the self-avowed “brand evangelist” transitioned to El Segundo-based Mattel’s American Girl line, with headquarters in Middleton, Wisconsin, a Madison suburb. Dickson is president of the American Girl subsidiary and a senior vice president of Mattel, home of the iconic Barbie doll. She commutes from Minneapolis.

For the uninitiated, American Girl is a line of 18-inch dolls first released in 1986 by Pleasant Co., founded by Pleasant Rowland, an educator and writer who turned her fascination with history into a business. The dolls, which represent a variety of races and ethnicities, portray girls 8 to 11 years old. In the beginning, each doll was designed with a story linked to a particular period. The line now features a number of contemporary characters, including a boy doll named Logan, an aspiring drummer who teams up with a singer-songwriter named Tenney. American Girl sells accompanying books told from the characters’ viewpoints, along with clothing and accessories.

The dolls and accessories are an investment. Luciana Vega, American Girl’s 2018 Girl of the Year doll and winner of the Oppenheim Toy Portfolio Platinum Award for 2018, sells for $115. Her spacesuit with astronaut helmet costs $75.

American Girl’s mission is “to be a trusted partner in building girls of strong character.” Luciana epitomizes that idea. Billed as “creative and confident with a serious science streak,” she decides to attend Space Camp. Founded in the 1980s in Huntsville, Space Camp is the real deal, the brainchild of rocket scientist Wernher von Braun, who led the development of the Apollo-era rockets that took Americans to the moon. Space Camp welcomes children and adults eager to play at being astronauts.

Dickson acknowledges that the Huntsville connection is no coincidence. “We all try to infuse our experiences into the dolls we create,” Dickson said. “It was a thrill to infuse my hometown Space Camp into Luciana’s story.”

In her office at American Girl, Dickson displays a photo of her family, thank you letters from American Girl fans and a congratulatory letter from Alfred E. Osborne, Jr., one of Dickson’s favorite Anderson professors, who serves as the school’s interim dean. Also on exhibit are eight American Girl dolls, available for play.

“One of the things I always hold very close from my UCLA training is the importance of knowing what business you’re in,” Dickson said. “American Girl is not exclusively in the toy business. We are in the business of telling great stories to girls that help them develop into the best women they can be.”