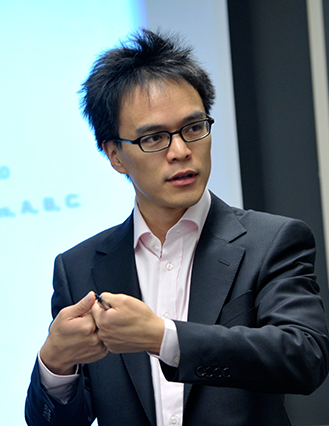 Keith Chen is a professor of economics with tenure at the UCLA Anderson School of Management. His research blurs traditional disciplinary boundaries in both subject and methodology, bringing unorthodox tools to bear on problems at the intersection of economics, psychology and biology.

Chen also consults and advises numerous companies on topics at the intersection of behavioral economics, business strategy and dynamic pricing. Most recently he was the head of economic research for  Uber, where, among other projects, he redesigned Uber's dynamic "surge" pricing model.

2013: Science, Editors' Choice for "The Effect of Language on Economic Behavior"

Give Unto Others: Genetically Unrelated Cotton-Top Tamarin Monkeys Preferentially Give Food to Those Who Altruistically Give Food Back, Joint with Marc Hauser, Frances Chen & Emmeline Chuang, Proceedings of the Royal Society, Nov 2003

Could your language affect your ability to save money?

What can economists learn from linguists? Behavioral economist Keith Chen introduces a fascinating pattern from his research: that languages without a concept for the future — "It rain tomorrow," instead of "It will rain tomorrow" — correlate strongly with high savings rates.

Hidden Brain: This Is Your Brain on Uber
TED Radio Hour: The Money Paradox

Politics really is ruining Thanksgiving, according to data from 10 million cellphones – Washington Post 11/15/17

Can Your Language Influence Your Spending, Eating, and Smoking Habits? – The Atlantic 9/10/13

Is Medical School a Worthwhile Investment for Women? – The Atlantic 7/23/12

Prison conditions: Gently does it – The Economist 7/26/07