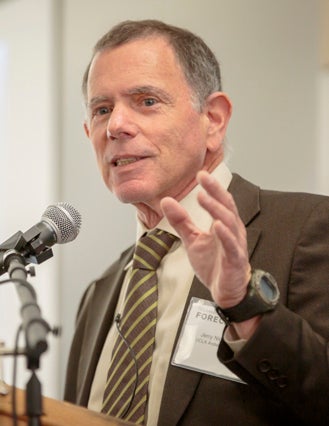 Faculty Director, UCLA Anderson Forecast; Adjunct Professor of Economics
“We develop a high-quality toolkit for analyzing business and looking at the world.”
jerry.nickelsburg@anderson.ucla.edu
(310) 206-1132
https://www.anderson.ucla.edu/sites/default/files/documents/sites/faculty/gem/Jerry-NickelsburgCV-2020.pdf
Twitter
About

Jerry Nickelsburg joined the UCLA Anderson School of Management and the UCLA Anderson Forecast in 2006. Since 2017, he has served as faculty director of the Forecast. He earned his Ph.D. in economics from the University of Minnesota, specializing in monetary economics and econometrics.

Nickelsburg plays a key role in the economic modeling and forecasting of the national, California and regional economic forecasts. He researches labor economics, industrial organization, statistics and international monetary economics, focusing on the development of new data and the application of economic theory and statistical methods to sector-specific policy issues. His current research encompasses transportation and environmental economics, and the relationships between highly skilled persons and their demand for social insurance. He has conducted special studies into the future of manufacturing in Los Angeles, the economic impact of the writers’ strike, the undocumented construction and manufacturing labor force, and the garment industry.

Formerly a professor of economics at the University of Southern California, Nickelsburg held executive positions with McDonnell Douglas, FlightSafety International and FlightSafety Boeing during a 15-year span in the aviation business. He developed forecasting tools for the Federal Reserve Board of Governors and has advised banks, investors and financial institutions. From 2000 to 2006, he was the managing principal of Deep Blue Economics, a consulting firm he founded.

Nickelsburg teaches economics in UCLA Anderson’s MBA program, with a focus on business forecasting and international business economics. He travels regularly with students to Asia as professor and advisor in their global immersion courses.

Nickelsburg is cited by the national media, with frequent mentions in the Financial Times, Wall Street Journal, New York Times, Los Angeles Times and Reuters. He has published more than 100 scholarly and popular articles on economic policy, monetary economics, statistics, labor economics and industrial organization, and he is the author of two books on monetary economics and exchange rates.

“On the (Ir)relevance of Skill Specificity for Social Insurance,” Quarterly Journal of Political Science, 7:1:35-67, 2012 (with J. Timmons).

“Organizational and Individual Learning and Forgetting,” Industrial and Labor Relations Review, Vol. 65 (1):68-81, 2012 (with M. Kleiner and A. Pilarski).