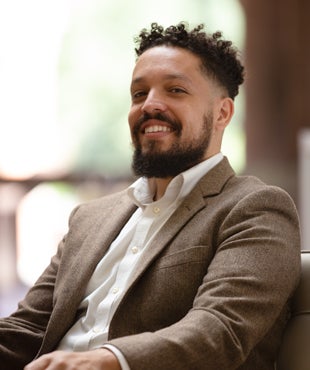 Applied microeconomist Kareem Haggag studies topics at the intersections of economics, political science and psychology. His research attempts to understand the roots and consequences of biases in the contexts of consumer choice, finance, education, voting and labor markets.

Haggag came to his field through a combined interest in understanding how people make decisions and in how to use those insights to mitigate inequities across society. “I realized that a Ph.D. in economics was flexible enough to study causal questions across a range of human experiences,” he says. “Rapid growth in the types of newly available data — ranging from smartphone-generated GPS records to large-scale voter files — has allowed us to bring insights to age-old topics in economics, psychology and political science using modern econometric tools.”

He has most recently explored the effects of school racial diversity on political identity. He and his fellow researchers studied the dramatic changes in schools’ racial composition that resulted from a large North Carolina school district’s busing policy reforms. They produced causal evidence of the link between partisanship and childhood circumstances, concluding that exposure to diversity at school could directly influence a child’s political preferences later in life. “Our study suggests that school environments play an important role in determining long-run political behavior, and adds to a growing literature re-examining the ‘contact hypothesis’ outside the laboratory,” says Haggag.

Haggag joined the UCLA Anderson School of Management faculty in 2021. He previously served on the faculty of Carnegie Mellon University and was a postdoctoral fellow with the Financial Inclusion Program at Yale University/Innovations for Poverty Action. His publications have been widely cited by press and media such as the Washington Post, The New York Times, Scientific American and NPR’s Morning Edition. He is a Faculty Research Fellow at the National Bureau of Economic Research.