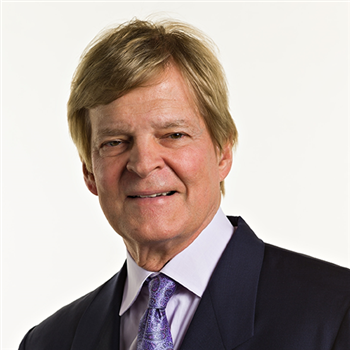 A proven leader in business, government and philanthropy, Stewart W. Bainum Jr. has served for 23 years as the Chairman of the Board of Choice Hotels International, one of the largest and most successful lodging franchisors in the world. Over the course of his career, he has been the chief executive of four publicly listed companies: Choice Hotels; HCR Manor Care, which operates nursing and assisted living facilities; Vitalink Pharmacy Services; and Sunburst Hospitality.

Mr. Bainum began his career in hospitality at the age of 12, working under the supervision of his father, Stewart Bainum Sr., the founder of a small chain of hotels that eventually became Choice Hotels and HCR Manor Care. With summer jobs that ranged from checking in guests to fixing toilets, the younger Mr. Bainum was imbued at an early age with respect and empathy for guests and workplace team members alike.

After joining Manor Care in 1972, Mr. Bainum went on to serve as chairman and CEO of Manor Care Inc. from 1987 to 1998, when the company merged with Health Care and Retirement Corporation. During his 26-year tenure at Manor Care, market value grew from $12 million to over $3.5 billion while delivering tremendous annual shareholder return to its shareholders. He also created a customer-focused culture that also benefited the company’s 50,000 employees.

The second of four children born to Jane Goyne and Stewart W. Bainum Sr., Bainum graduated from Takoma Academy and received a Bachelor of Arts degree in history from Pacific Union College in Napa Valley, California where he was also elected president of the campus student association. He earned his MBA at the UCLA Anderson School of Management and later taught at Southern College in the Tennessee River Valley. After UCLA, Bainum studied theology at Andrews University in Berrien Springs, Michigan from 1971 to 1972.

In addition to his business career, Mr. Bainum has also been a civic leader and elected public official. In 1979 he was elected to serve in the Maryland General Assembly and from 1983-87 in the Maryland Senate, serving on the budget and/or tax committees of each. Described by Forbes as a “fiscal-minded Democrat,” Mr. Bainum’s legislative achievements earned him recognition from the NAACP, Maryland Common Cause and the Maryland League of Conservation Voters.

Mr. Bainum remains active in Democratic politics and in the community, serving as a delegate to the Democratic National Conventions in 1984, 1992 and 2008, and serving on the Board of Trustees of Johns Hopkins University, the University of Maryland Medical System, St. Mary’s College, the Baltimore Symphony Orchestra, and Bowdoin College. In 2019, he was honored with the Americas Lodging Investment Summit (ALIS) Lifetime Achievement Award and is currently a member of the Board of Visitors of UCLA’s Anderson School of Business.

Stewart and his wife Sandy live in Maryland, where they raised their two sons. In September 2018, Mr. Bainum and his wife Sandy committed to The Giving Pledge, a campaign to encourage wealthy people to contribute a majority of their wealth to philanthropic causes. “We are especially proud that this pledge also expresses the wishes of our two sons, who share the belief that one’s highest calling is to make a difference in the lives of others.”