Nate Franklin (’08) knew he wanted to be an entrepreneur.

“I knew that’s what I was best suited for and what I was really passionate about,” Franklin says. His instincts proved correct. Today, Franklin is president and CEO of Pacifico Energy, a Tokyo-based enterprise building renewable power plants in Japan and, most recently, Vietnam.

“I don’t think I would have been anywhere near as successful, or had the confidence to actually do what I did, without the things that I learned at Anderson.”

Franklin entered UCLA Anderson from finance, having worked for Citigroup. While in school, he considered opportunities in investment banking. “I saw that as the quickest path to make as much money as possible, to enable me to then go be an entrepreneur,” he says. At a recruiting event for Edison Mission Energy, he heard a pitch for the company’s new renewable energy group and its plans to spend billions on new projects. Franklin got the job, learned as much as he could about the solar business, then started out on his own. He lined up investors and put together some energy projects that were eventually acquired by British Petroleum. “Shortly after that, I saw a similar opportunity in Japan,” he says.

Four years after earning his MBA, Franklin and his family moved to Tokyo to launch Pacifico Energy, just as that country was ramping up a commitment to renewable energy sources in the wake of the Fukushima Daiichi nuclear disaster.

In simple terms, Pacifico Energy builds renewable power plants designed to replace fossil fuel or nuclear plants, putting power right into the grid, just like any other power plant. The plants meet the energy needs of hundreds of thousands of households. The company develops the plants, which involves coming up with the initial idea, acquiring land and permits, designing the power plant and lining up contracts to sell the power. It then determines the construction company and financing, manages the construction company during construction, then continues as asset manager of the completed plant during the operational life. A year ago, Pacifico Energy launched development of its first offshore wind projects.

“What’s really cool is you’re essentially creating energy. Our variable cost of energy is zero; our variable cost to create the energy is nearly zero. So it’s neat that you’re almost creating energy out of nothing,” Franklin says. “There’s no fuel that you have to procure or drill for; it’s just there and in abundance.” He says that the cost to build a solar power plant now is only 20 percent of what it was 10 years ago and wonders if eventually energy will cost next to nothing.

“What kinds of new businesses or ventures is that going to create?” Franklin asks. “I think that we’re going to see a lot of change and progress in the power industry in the future. It’s neat to be a part of that.”

Franklin credits his Anderson education with giving him the confidence to do something as audacious as start a business in a foreign country. “I felt much more equipped to understand all aspects of the business [thanks to] the time I had been at Anderson, which really helped me to succeed,” he says. He mentions courses taught by Bill Cockrum and Stuart Gabriel that still resonate with him and says that the people you meet in business school “really open your eyes to whole new worlds out there. The cumulative effect of the whole experience, I think, really just gave me a great launching pad to actually go and do something like this on my own. I really don’t think I would have been anywhere near as successful, or had the confidence to actually do what I did, without the things that I learned at Anderson and the tools that it gave me.” 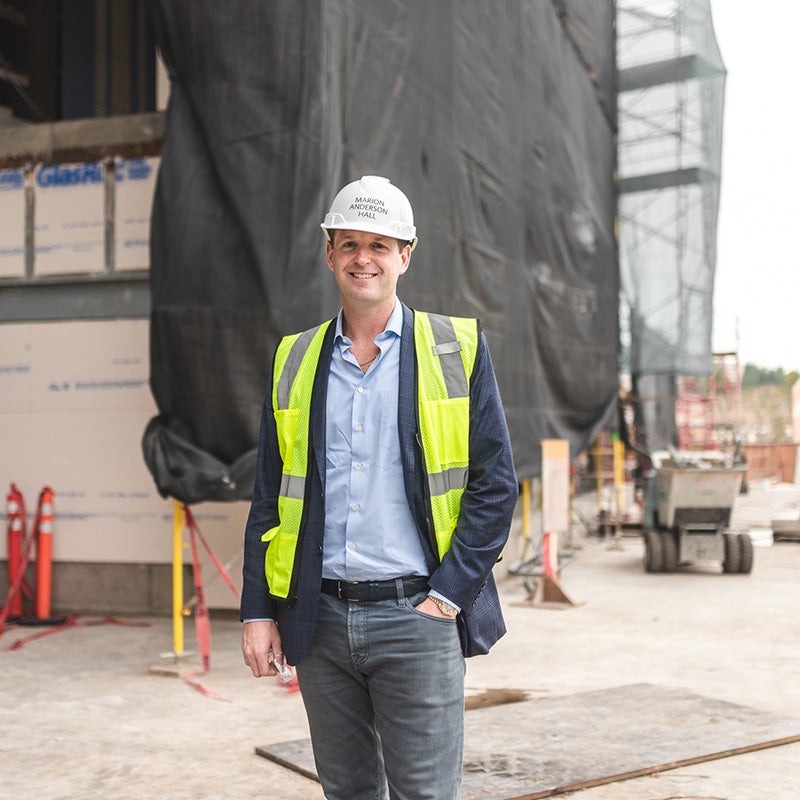 Franklin is intent on ensuring that the next generation of Anderson students benefits from the experience as much as he did. Last spring, he attended his 10-year reunion and inquired about making a gift to the school. After a few conversations and a look at Marion Anderson Hall under construction, he decided to contribute to the project. As a result, future students will take courses in the newly anointed Franklin Classroom.

“There are a lot of positive things going on at Anderson, and it’s great to contribute to that,” Franklin says. “I’d encourage anyone to do what they can, whether [through giving] time or anything else, to help out. I think the more people that do, the better Anderson will be, and it’ll help a lot of students to go on and do amazing things. I really do believe that coming to business school, and Anderson in particular, gives people the opportunity to accomplish whatever they want to do. It’s really a platform for opportunities.”

Franklin is one of the more than 13,000 benefactors whose generosity helps the entire UCLA Anderson family. Together, they’ve given more than $300 million in support of the school’s Into the Next campaign.