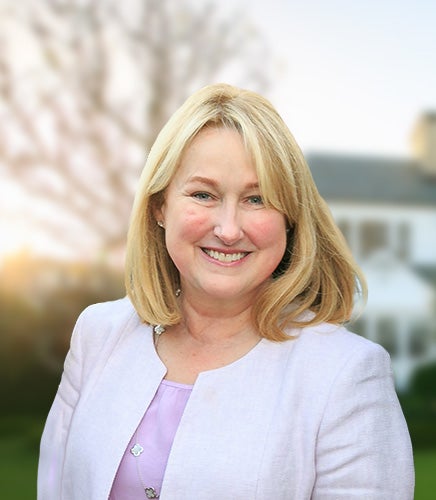 UCLA Anderson alumna Donnalisa Barnum (’86) is a retired investment manager with Capital Group Companies. She has served UCLA Anderson on the Board of Advisors and Executive Committee and as co-chair of the school’s $300 million Centennial Campaign. A philanthropist and passionate volunteer, Barnum made an eight-year commitment to the UCLA Investment Company board of directors and has served her undergraduate alma mater, Stanford, in a variety of roles, receiving that institution’s Governor’s Award. In 2022, UCLA Anderson recognizes her with the Outstanding Alumni Service Award.

It’s a results-oriented profession with returns as the primary goal.

But throughout her career as a portfolio manager for Capital Group, Donnalisa Barnum (’86) had more than profits on her mind.

“I always thought about my portfolio as if the people whose money I was managing were my parents,” the daughter of two educators says. “After you’ve been teaching your whole life, you want a nice retirement. So, the thing I cared the most about was that, having good numbers, having good results, meant something for the people for whom I was managing money, even though I never met them.”

Barnum, a Whittier, California, native, worked for only two companies in her 35 years in finance. She started as a corporate finance analyst at Morgan Stanley in New York City, and then moved to Capital Group Companies in 1985 as a summer intern between her first and second years at UCLA Anderson (then still known as UCLA’s Graduate School of Management). She returned to Capital Group full time after graduation, initially as an analyst providing research and managing a small portfolio in food, beauty and general consumer products, industries that weren’t exactly her first choice.

“I asked to do autos and insurance, because I thought they sounded masculine and tough, and I was a Southern California girl with long blonde hair,” Barnum says, noting that about 15% of Capital Group’s portfolio managers at the time were women. Her bosses told her they’d mull her request, then came back and said her industries would be household products and toiletries. “Cosmetics?” Barnum, recalls with a laugh. “I don’t even wear make-up now.” She says she took the assignments with a sense of humor and these industries proved to be great places to be in the 1980s. Eventually, food manufacturing and retail became her industries as well.

After 15 years, Barnum moved to the mutual funds side of Capital’s business. She gave up her client responsibilities and was tasked with managing a substantial pool of capital as a portfolio manager. This was primarily in Capital’s largest mutual fund, the Growth Fund of America, which continues to be the largest mutual fund in the U.S., with assets of $150 billion. She also served on the audit and investment committees.

But Barnum is much more than her successful, glass-ceiling-breaking career. She is a passionate volunteer who believes deeply in giving back, particularly to education-related causes.

Barnum also has several passions she has pursed as a volunteer. She co-chaired her last six Stanford undergraduate class reunions, from the 15th to the 40th, in a fundraising role. She has served her undergraduate alma mater in a variety of roles and received that institution’s Governor’s Award. She also served on the board of Embrace, a startup with a revolutionary low-cost incubator that was deployed in areas around the world with high infant mortality rates and little access to hospitals. For the past 15 years, Barnum has also served on the board of trustees at Saint John’s Hospital Foundation in Santa Monica, California, where she has been active on the board affairs and investment committees. She has a soft spot for Saint Matthew’s Parish School, where she was Parent’s Council president and served on the school’s board and investment committee, as well as on the vestry for five years.

At UCLA Anderson, Barnum has served on the Board of Advisors and Executive Committee. Recently, she completed an eight-year commitment to the UCLA Investment Company board of directors.

But her highest-profile role at Anderson was serving as co-chair (alongside Dennis Keegan [’80], whom she calls a “perfect partner”) of the $300 million Centennial Campaign. That effort included Marion Anderson’s transformational $100 million gift that led to the building named in Anderson’s honor.

“When [then Dean] Judy Olian first asked me to be co-chair, I kind of gulped because I thought ,‘Oh my gosh, that’s a daunting task,’ and I was still working. I was also on the investment board for UCLA at the time,” Barnum says. A colleague actually warned her not to take on the campaign because of the amount of time and attention it would require of her. “But I thought it was a way to become more involved, and I really want more alumni to come back and make a connection — not just for giving money, but also for the continuing education classes they’ve got on Zoom now, or just to see their classmates again.

“During that time, I came to have such an appreciation for what an amazing group of alumni Anderson has. I mean, you look at the Board of Advisors, it’s one of the best boards, in terms of people with amazing jobs, backgrounds and accomplishments of any of the business schools.”

Barnum was an English major at Stanford and says that as the daughter of teachers who footed the tuition, she knew she’d have to earn a living after graduation. She took a job in Washington, D.C., working for a congressman, and there she met a woman working for an investment bank in New York. Barnum decided to pursue similar opportunities and ended up at Morgan Stanley after interviewing with a number of firms. As an English major in finance, she soon realized she needed to bolster her accounting and finance acumen. So, she decided to pursue business school after a Rotary scholarship allowed her to study in Australia for a time., earning an M.A. in English.

In the back of her mind, Barnum always considered returning to Los Angeles. Her husband Bill, whom she met on a cable car in San Francisco, took a job at Brentwood Associates, and Barnum preferred not to pursue her MBA in a different city. So, after applying and getting accepted to a number of top b-schools, Barnum enrolled at UCLA.

She and her family have remained close to the school ever since. In 2014, the Barnums donated the gift that established Anderson’s Donnalisa ’86 and Bill Barnum Endowed Term Chair in Management. In addition to their generous philanthropy and Donnalisa’s commitments, Bill has taught for years in Professor Bill Cockrum’s popular ethics course at Anderson. For Donnalisa, it wasn’t just the education that kept her loyal (though she is grateful for her academic experience), it was the personal connections. She remains close to a successful group of women who were in her class and embrace the school’s principle of “share success.”

“It was a very high-caliber group of people that were at the school. There were a lot of people with engineering backgrounds that were so good at all the math and science, which was exactly what I needed to work on. But they needed help in other areas, and it was a very collaborative atmosphere. The things you weren’t good at, people would help you with, and the things they weren’t good at, you’d help them in turn,” Barnum says.

Barnum also has fond memories of UCLA’s b-school faculty of the day, including Professor Fred Weston. “He was a legend,” Barnum says. “I had him for Intro to Finance and that was my first time taking a course like that. He was so kind and patient. I felt lucky to be studying with someone of that caliber.” And in what remains a through line between the ’80s and now, she fondly remembers Bill Cockrum’s teaching his class using the Socratic method. “He would just call on you in the middle of class, and I was a little terrified of him,” she says. She also remembers earning an A in Cockrum’s corporate finance class and, yes, she’s still proud of that A. The relationships last to this day. Just a few years ago, Donnalisa and Bill hosted a dinner celebrating Professor Cockrum’s 80th birthday with a number of his former students in attendance.

Taken together, it all adds up to a continuing desire to be of service to UCLA Anderson and to support educational causes.

“I just feel very fortunate. I had great parents who were very encouraging. My mom went back to school when she was 54 and got a master’s degree to become a school principal. I also have a sister-in-law who is a teacher, so my husband and I started giving back to Stanford and then UCLA,” she says. “I think about giving back in terms of time, talent and treasure. I always try to tell people that if they don’t have the wherewithal to give a lot of money, they can always volunteer their time or their talent.”