Checking the Pulse of the Entertainment Industry

“Nearly Every Aspect of My Life Is Different For the Better”

The annual UCLA Anderson Pulse Entertainment, Sports & Technology Conference once again featured an outstanding array of speakers and panelists with unparalleled expertise from a cross section of content-creating sectors. Organized by the school's Center for Management of Enterprise in Media, Entertainment & Sports (MEMES), the event offered attendees in-depth analysis from the points of view of both the business and creative sides of these varied industries. 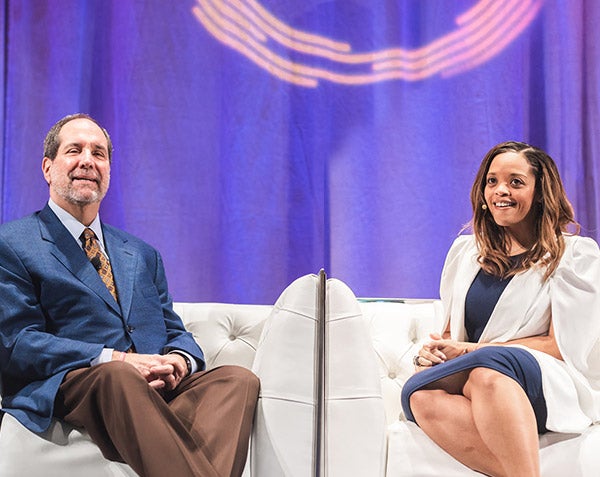 Danita Johnson, president and COO of the Los Angeles Sparks, focuses on the business side of the WNBA franchise, as she tasks general manager Penny Toler and head coach Derek Fisher with putting a high-quality product on the court. Johnson, who has more than 15 years in the sports  business (primarily basketball), participated in a keynote chat with Adjunct Professor Jeff Moorad.

Moorad wondered how the Sparks competed for customers in a crowded Los Angeles sports landscape that includes multiple franchises in multiple leagues. "You've got to find your own space and you have to do things your own way. And I have to add, out of all those teams, we're the last team in Los Angeles to win a championship," Johnson said, while showing off her oversized championship ring. "It is competitive, and with women's sports getting just four percent of coverage, we have to be more grassroots, more organic, build our own content platforms and tell those stories. We don't need every single person to understand us, (but) we need some.

"Leading an organization, male or female, is going to be tough and for a lot of people, a women leading a (sports) organization is non-traditional. But when you look at women executives, most of them were athletes at one point in their lives," Johnson said. "Women's leadership is actually helping companies attract better business. There are definitely challenges day to day. I go to conferences and it's 500 men and 75 women representing sports. I think it's part of my responsibility for myself and other women and men in these positions to lend a helping hand. And when I say 'helping,' I mean to those who deserve it, who are willing to put the work in." 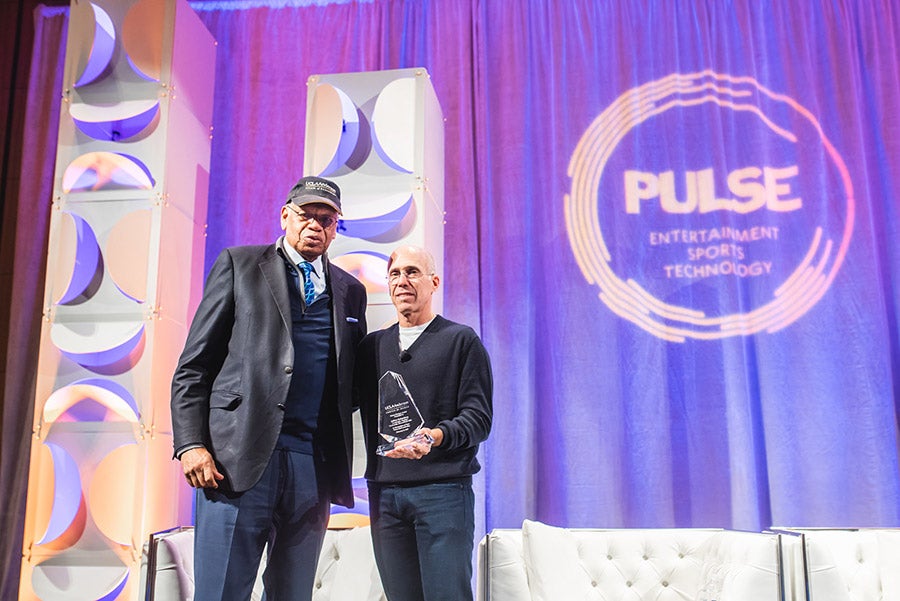 The Pulse Conference also featured the presentation of the annual Game Changer award to entertainment legend Jeffrey Katzenberg, whose accomplishments over 40 years in the entertainment industry include serving as president of production at Paramount Studios and chairman of the Walt Disney Studios, where he oversaw a renaissance of animation while helping to usher the studio's transition to digital production. Katzenberg was also a co-founder (along with Steven Spielberg and David Geffen) of DreamWorks SKG. He was CEO of DreamWorks Animation when it became a publicly traded company. Currently, Katzenberg is a co-founder and managing partner of WndrCo, a holding company that invests in, acquires, develops and operates consumer technology businesses for the long term. He is also the founder and chairman of the board of Quibi, a mobile-first media platform incubated at WndrCo.

The presentation was made by Interim Dean Al Osborne, who noted that Katzenberg exemplified the characteristics of a true entertainment game changer, which include creating memorable experiences for audiences, forging powerful partnerships, disrupting technology platforms and building transformative business models while leading an industry in the midst of change. "We seek industry impact and exceptional leadership among our honorees," Osborne said.

Following the award presentation was a conversation between Katzenberg and UCLA Anderson Board of Advisors member Harry Sloan, chairman and CEO at Global Eagle Acquisition Corp. Katzenberg credited much of his success — in animation and otherwise — to following the path paved by Walt Disney and advice he received from George Lucas.

Disney, Katzenberg said, left detailed notes on every aspect of the creation of his studio's classic animated films like Snow White and the Seven Dwarfs, amounting to "crumbs the size of Volkswagens" that anyone could follow. "Walt Disney was the author of the roadmap," Katzenberg said. "I just followed his map."

Sloan asked Katzenberg what else he thought made him so successful. "I think maybe the ability to recognize a good idea. That's something that Barry Diller and Michael Eisner both trained me to do," Katzenberg said. "There is some instinctive piece. I do know when I hear a good idea. George Lucas once told me, 'If you take a great idea and make it great, you have a blockbuster. If you make it just OK, it's still a good idea. If you take a bad idea and make it perfect, it's still a bad idea.' You have to start with a great idea. That's about having ears and eyes."