“Nearly Every Aspect of My Life Is Different For the Better”

If You Want to Be Happy for the Rest of Your Life, Optimize It with Scientific Design

The value of committed board service cannot be underestimated, and nowhere is that truer than on the board of UCLA Anderson's Riordan Programs. Board member and UCLA Anderson alumna Patrice Greenwood-Eitner ('04) sets an astonishing example of dedication and follow-through, instilled, she says, by her "deeply entrenched give-back feeling because I gained so much from my participation in the programs." 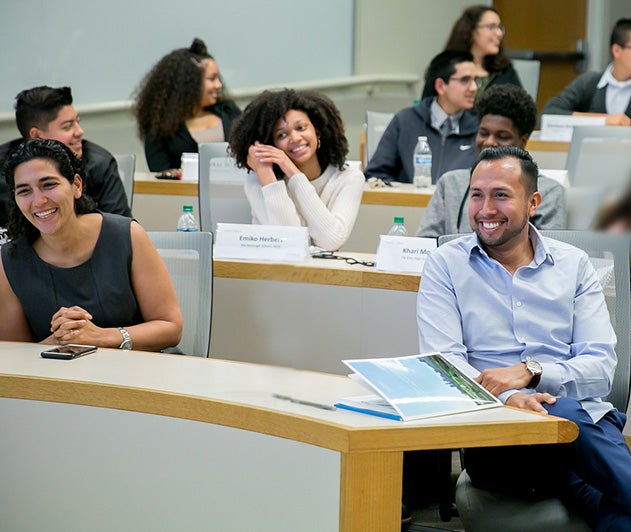 Distinguished Professor Emeritus William Ouchi's inspiration for what would become the Riordan Programs came from testimonials among inner city youths whose lives and professional prospects were changed by mentors who exerted a positive influence on them. Launched in 1987 with L.A. Mayor Richard Riordan, the programs offer leadership guidance to underrepresented high school and college students to excel in education and business.

Through strategic partnerships, sponsorships and the contributions of mentors among faculty, MBA students and business professionals, the programs have flourished in the spirit of Anderson's service mandate. Today, the Riordan Programs are steered by executive director Roxanne Mendez, her staff, an executive committee and 17 dedicated board members, many of them Anderson alumni.

Greenwood-Eitner's history with the school and, in particular, the Riordan Programs dates back almost to the programs' inception. She was a Riordan Scholar in high school in 1991 and in 1996 became a Riordan MBA Fellow. As a first-year student at Anderson, she mentored Riordan Scholars. For more than a decade, she has co-taught the class that prepares students for the Riordan Scholars Annual Stock Market Analyst Competition with fellow alumnus Jeffrey Kabot ('92), managing director of MezzCap Partners LLC. She earned Riordan's Distinguished Alumni Achievement Award in 2011 and has served on the board since 2017. 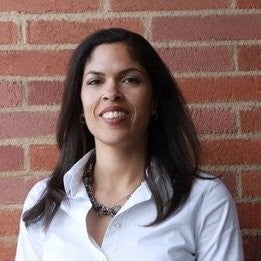 The Los Angeles native was a first-generation college student, steered into college prep programs early by her mom, who wanted her only daughter to graduate with a university degree. "I can't remember when that wasn't part of my life plan," says Greenwood-Eitner, who earned a B.S. in industrial and systems engineering at USC.

"The Riordan Programs changed the direction of my career," says Greenwood-Eitner, a finance, international business and marketing executive at money management firm DoubleLine Group who came close to pursuing a law degree. Avid about science in her younger years, she says she also always had a keen interest in the business world. She had done an internship at Accenture as an undergraduate and gravitated to business school because of the Riordan Programs' influence. What's more, she was sure UCLA Anderson was the right cultural fit for her, thanks to her exposure to the school and its alumni, faculty and administrators while completing the Riordan Programs.

Not all first-gen kids are tracked as successfully into higher education, and not all of them know how to pair their interests and talents with the most rewarding career opportunities. This is where mentorship makes the crucial difference.

Greenwood-Eitner says she's floored by the caliber of student the Riordan Programs admit and believes one of the programs' most important functions is to make sure the students are aware they can compete for admission to elite colleges and universities. "There are Gates Millennium Scholars among Riordan grads," she says. "First-generation college students need to look beyond only local options for the best possible fit. They might realize they want to study at Harvard or Yale."

“ The mentor programs are great because, for many students, they may mark the first exposure to professionals in a particular industry or role.”

Mendez applauds Greenwood-Eitner's efforts to help students aim high. "Patrice's exemplary long-term commitment to the Riordan Scholars Program is her personal pledge to help the next generation of promising leaders," Mendez says. "We are grateful for her continued involvement. Quite simply, it is this type of alumni commitment that allows the programs to thrive year over year."

She may have served only two years on the board, but with a 30-year Riordan affiliation, Greenwood-Eitner is gaining her footing fast. "The Riordan Programs are so mature," she says. "Now the challenge is determining how to take things to the next level. What's the additional component that will open students' eyes to what they could or should be pursuing? Maybe host a mini college fair with program alumni so they can get exposure to institutions they may not otherwise consider through the lens of a program alumni with a similar background? Maybe we should fund East Coast college tours?"

The Riordan Programs are also instrumental in teaching young people how a business degree can empower them in many professions. "The mentor programs are great because, for many students, they may mark the first exposure to professionals in a particular industry or role. For example, one of my Riordan mentors was an investment banker, and it was the first time I had heard of that as a career. She talked about what it was like to be one of the few women on her team. It gave me great perspective."

Greenwood-Eitner recalls that what attracted her to Anderson was the chance to explore a broad curriculum that exposed her to more than just finance. She says of the Riordan students, "Some have altruistic goals and want to make change in the world. We show them that an MBA can empower that, can be influential in a nonprofit as well as a for-profit setting. Anderson's a great place because you can explore that."

The Riordan Scholars Program, College to Career Program and MBA Fellows Program have motivated high school and college students and recent college graduates from diverse and disadvantaged backgrounds to consider careers in management through education, mentorship, professional development and leadership training. To date, the Riordan Scholars Program boasts a 100 percent university attendance rate, many gaining admission to top-tier universities such as Harvard, USC and leading medical and law schools. More than 3,500 Riordan Scholars have graduated from the program, many securing positions at elite companies and becoming local community and business leaders. Notable Riordan alumni include California Secretary of State Alex Padilla and Marla Bleavins, deputy executive director and CFO of the Port of Los Angeles.