Less Leveraged Than the Competition: Ready to Snag Distressed Assets in a Recession

After 10 straight years of U.S. economic growth, it’s tempting to think that we’ve banished recessions once and for all. But in the likelihood that there’s another one out there somewhere, business managers would do well to heed Warren Buffett’s famous line about excessive risk-taking in good times: “You only find out who is swimming naked when the tide goes out.”

One critical question that companies face is how much debt to take on when the economy is sailing along. A seemingly “reasonable” debt level in periods of robust growth can quickly become a heavy burden when recession arrives — as the 2008 financial crisis demonstrated.

However, there’s another drawback to having a balance sheet loaded with leverage: It can restrict a company’s ability to buy attractive assets on the cheap from suddenly distressed rivals.

The importance of being prepared to cherry-pick assets is the focus of a working paper by UCLA Anderson’s Antonio E. Bernardo, Alex Fabisiak (a Ph.D student) and Ivo Welch. Their model illustrates how companies might decide on optimal debt levels ahead of a period of financial stress in a specific industry or across the economy.

Businesses should pay attention to the debt strategies of their peers — because all of those individual company strategies, when combined, will determine who will buy choice assets in the next economic slump, who will sell them and how cheap the prices of those assets will get.

Management must balance the present-day desire for growth, funded by borrowing, against both fears of an economic downturn and the opportunistic possibility of picking up today’s high-priced assets later on the cheap, if more leveraged competitors run into trouble.

Below, for purposes of illustration, is a debt-to-equity chart that includes four major players in the global auto parts industry, two of them by this measure considerably more levered than the others. 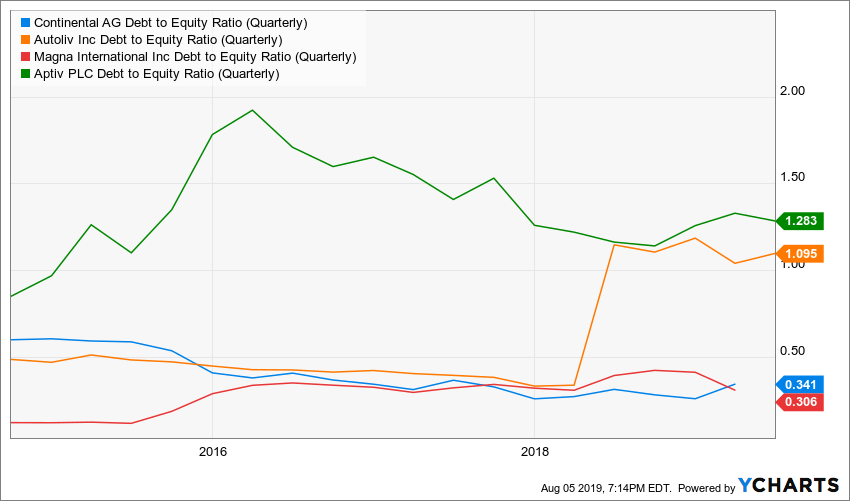 Takeaways from the study:

At first, when asset redeployability improves, low-debt companies aren’t likely to rush to buy. “It makes little sense for such firms to speculate on purchasing assets; the assets are simply not valuable enough,” the study says. But “eventually, when redeployability increases further, the potential to buy assets becomes more lucrative.”

Interestingly, “with indivisible assets, otherwise identical firms may adopt different debt policies,” the study says. “Some firms lever up to take advantage of the direct ongoing value benefits of debt,” such as the interest tax deduction. Those companies may even anticipate having to fire-sell certain assets as part of their long-term strategy, the authors write.

The study isn’t written from the standpoint of shareholders, but there’s an implicit message for them: With the economy still advancing, this is a good time for investors to look at how much debt their companies carry, the interest costs of that debt and management’s general strategies regarding the use of low leverage as dry powder.

Better to ask questions now than wait for a recession to force the issue.

Antonio “Tony” Bernardo’s research spans various areas of corporate finance. His recent research on bailouts provided a set of policy recommendations to lawmakers looking to design bailouts for distressed firms. His current work on optimal capital structures suggests that capital structure decisions are determined, in part, by the debt choices other firms in the industry are making. Bernardo has taught finance at UCLA Anderson for more than 20 years and is the school’s ninth dean.

Informed by personal experience, a researcher parses data to help those mulling mastectomy and gynecological surgeries