Does a Rising Tide of High-Wage Tech Jobs Really Lift All Boats?

Analysis shows an increase in jobs for low-wage workers, but the buying power of their paycheck declines

The competition for Amazon’s HQ2, aside from its massive scale, was standard operating procedure in the local economic development world: An employer dangles the possibility of highly paid tech jobs, and cities line up to offer huge subsidies on the assumption those workers will spend and invest, lifting the local economy.

Opposition to such employer subsidies has tended to focus on the curiosity of cash-strapped municipalities that are paying solidly profitable companies to do what they’re going to do anyway, if not necessarily in your town.

The income side of the economic development equation — that the addition of high-paid jobs ultimately helps lift the pay of everyone nearby — has been less questioned. But a UCLA Anderson Forecast report on wages and employment in places that landed those coveted jobs finds limitations to tech-inspired prosperity, even for many workers within the industry.

UCLA Anderson’s William Yu identified overall tech employment in the U.S., cities where such work represents the largest percentage of overall employment, and the growth in tech jobs and wages from 2010 to 2018. He found growth in tech jobs associated with an overall growth in local employment. In San Jose, Seattle and San Francisco, gains in tech jobs during those years were accompanied by far larger gains in overall employment. And paychecks nominally looked bigger for low-skilled workers, rising by about $1,000 per year for every $10,000-per-year increase enjoyed by tech workers.

But adjusting for cost of living, things don’t look as good for the low-skilled worker. Yu found most suffered an effective $2,000–$3,000 annual decline in wages during the period. Yu also found that only half of overall tech jobs enjoyed real wage growth from 2010 to 2018.

And those numbers may actually underestimate the pain because Yu used the national consumer price index in his calculations, and tech-heavy cities have seen housing prices rise far faster than the nation as whole. 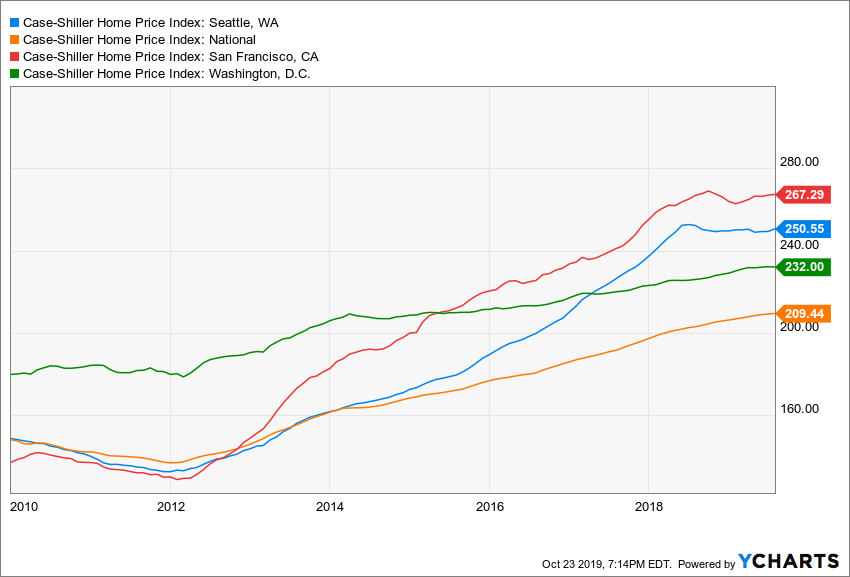 Adding tech jobs did not change the rate of wage growth for other local workers, even if rising populations of these high-income earners raised costs, Yu explains. In all metros, even those where the number of tech jobs doubled or tripled in the eight-year period, low-skilled workers saw their real wages fall, according to the findings. About half of the tech workers also saw their buying power steadily reduced by insufficient wage increases, according to Yu’s estimates.

The Forecast report is in line with other national research that finds growing pay gaps between the highest and lowest earners, particularly in cities with a lot of companies in a single high-paying industry cluster. “Ideally, rising tech would raise all boats,” says Yu, “but that is not the case.”

The Forecast report illustrates this amplification by comparing the average skill level of the workforce in a metro area to later growth in its tech industry. Cities with relatively large percentages of highly skilled residents in 2015 often had large concentrations of tech jobs by 2018, according to the findings. Similarly, cities with a high concentration of tech jobs reported much larger average earnings among newcomers.

So, critical mass of talent does indeed attract more jobs and talent. But the lower-skilled workers in these cities, where home building badly lags population and job growth, are increasingly priced out of the housing market.

Yu, W. (2019). Tech jobs, talents, and the local economy. The UCLA Anderson Forecast for the Nation and California.

Research: Patients Spent 15 Hours Longer than Necessary in the ICU

A Tool for Finding Mispriced Stocks

Less sophisticated investors reveal their sentiment in certain trades, and a 20-year study measures it company by company