Leading in A Technology Driven World

Technology is fundamentally changing the world. Strong leaders need to be prepared for the impact.

How? By identifying the key leadership imperatives you need to know in order to change and thrive in this highly dynamic environment, this immersive program will provide current, real world insights on the critical issues you will face, whether you are part of an established organization, growing company or new venture.

Discuss changing business models
How monetization strategies are shifting between subscription, advertising, and transaction-based; how regulation threats are forcing tech players to change their strategies.

Identify promising innovation
Innovation is happening everyday. Discover how to know where and when innovation might occur.

Discuss talent and the organization
How organizations are thinking about and addressing changing talent requirements; how to adjust culture to meet competitive needs. 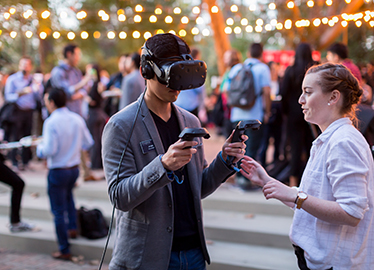 Keith Chen is an associate professor of economics with tenure at the UCLA Anderson School of Management. His research blurs traditional disciplinary boundaries in both subject and methodology, bringing unorthodox tools to bear on problems at the intersection of economics, psychology and biology.

Chen also consults and advises numerous companies on topics at the intersection of behavioral economics, business strategy and dynamic pricing. Most recently he was the head of economic research for Uber, where, among other projects, he redesigned Uber's dynamic "surge" pricing model.

A graduate of UCLA (B.A., ’82) and Harvard Business School, Terry Kramer has extensive technology and leadership expertise in the domestic and international telecommunications industry. Since beginning his career at Harris Corporation and Booz Allen Hamilton, Kramer has held executive roles at AirTouch, PacTel and Vodafone globally. At Vodafone, he was the group strategy officer, group HR officer and chief of staff. He was also regional president of Vodafone Americas, with responsibilities for oversight of Vodafone’s 45% interest in Verizon Wireless and Vodafone’s venture capital activities. He also served on the Executive Committee at Vodafone Group Plc.

During his tenure at Vodafone, he and his family moved no fewer than eight times to locations that included London, The Hague, Dallas, Phoenix and San Francisco. The benefit: “Living in so many different places, working in so many fundamentally different environments gave me a new appreciation of contextual leadership — how leaders must be adept at assessing the different context of each leadership role to ensure a dynamic nature to their style, achieving success for that unique environment.”

While serving as an entrepreneur in residence at the Harvard Business School between 2011 and 2013, Kramer was appointed by President Obama to serve as Ambassador, Head of U.S. Delegation for the World Conference on International Telecommunications in June 2012. This delegation formulated and communicated the U.S. policy regarding the criticality of a free and open Internet as well as an inclusive, multistakeholder governance, the need to proactively address cybersecurity threats and the need for liberalized, open markets that encouraged accelerated global broadband access. The conference was covered by CNBC, New York Times and Wall Street Journal.

No stranger to the field of academia (his parents were teachers), Kramer jumped at the opportunity to work at UCLA Anderson, as it provided “a chance to engage with the next generation of leaders.” An adjunct professor at UCLA Anderson since 2013, Kramer is a full-time faculty member, teaching the foundational technology management course, covering the impact of disruptive innovation on products, services, markets and competition, and another course on the evolution and innovation in the mobile communications industry and promising areas of innovation. He is also the Faculty Director of the Easton Technology Management Center. Kramer is the Board Chair of Skylo Technologies and Harvard Business School’s California Research Center. He also serves on the advisory boards of RapidSOS and Textpert and UCLA’s Economics Department Board of Visitors.

Originally from San Carlos, California, Kramer and his wife, Suzan, currently reside in the San Francisco Bay Area, from which he commutes to Los Angeles regularly. Together they have developed a family foundation focused on education, health and human services, which “reflects our views about the impact of youth and education on our collective future.”

Donna Sharp is Associate Dean at UCLA Anderson Executive Education. Donna brings more than 20 years of business education experience to UCLA Anderson and most recently served as executive director and interim associate dean of Executive Education for Columbia Business School in New York. Prior to her Columbia appointment, she was the director of Executive Education and Human Capital Development at Cornell University’s ILR School and previously served as Executive Director of the World Trade Institute of Pace University in New York. In addition to her experience in executive education, Donna brings important strategic, financial and operational management skills from her experience in both the public and private sector, and as a global entrepreneur. She has received numerous awards, including Woman of the Year from the Journal of Commerce, the Export Achievement Award from the U.S. Department of Commerce and the International Service Award from the Manhattan International Development Corporation.

Based in SVB's Santa Monica office, Managing Director Alejandro (Al) Guerrero works with portfolio companies and their management teams to help them build their vision for the future and succeed. Al’s experience in business creation, business and corporate development and investing, when combined with his proven ability and passion for increasing profits helps him work with early-stage tech startups throughout Los Angeles’ thriving ecosystem. He’s especially looking forward to leveraging more than a decade of experience in the Media & Entertainment vertical to help move forward some of LA’s most innovative companies.

Before joining SVB in 2017, Al managed business development, sales and operations for URWelcome, a venture capital–backed startup. Prior to that, he was co-founder and general partner at Technicolor Ventures, an early-stage venture capital fund. Before starting the fund, Al led Technicolor’s Innovation Lab and served as head, operations & strategy for the company’s visual effects and animation business where he played a pivotal role in increasing revenue 4x and improving margins to best in the industry. Earlier in his career, Al was an investment banking associate at Merrill Lynch & Company. He earned a bachelor’s degree from U.C. Berkeley and an MBA from Stanford University’s Graduate School of Business.

A first-generation American, Al grew up eating well – as his family owned and operated a popular Mexican restaurant in Berkeley. Married with three children who have inherited a culinary talent of their own, he remains a huge Golden State Warriors and Cal fan, despite having lived in SoCal for the past 15 years. In his spare time, Al assists the Robert Toigo Foundation, an organization focused on career advancement for underrepresented talent in the finance industry.

Prior to joining Accel, Paula led go-to-market recruiting efforts at Palo Alto Networks as that company scaled to over 5,000 employees and the #1 market position in network security. Earlier, she was with Heidrick and Struggles, a retained executive search firm, where she conducted executive level searches for the technology practice, focusing her work on early and growth-stage technology companies.

She began her career in the non-profit sector, holding a number of fundraising and programmatic roles with San Francisco Ballet and the Toigo Foundation.

Mark Thomas has had nearly a decade of experience as a Product Manager at leading tech companies including Google, Snap and IAC. In his 8 years as a PM at Google, he drove vision, strategy and execution across 50-100-person teams resulting in multiple, global launches impacting billions of dollars in revenue. Products he worked on include YouTube, Google Pay, Android, Google Ads and DoubleClick. He has additionally co-founded numerous “20% projects” including a Google Product Manager community which grew to thousands of members and an improvement for Google Calendar. He is currently a Group Product Manager at Snap Inc. leading a team of PMs working on improving ad effectiveness for the company’s flagship product, SnapChat.